We use cookies and similar technologies. By continuing the work, you agree to the terms of use of the site.

The problem of providing the necessary depth of oil desalting and reducing the consumption of flushing fresh water is closely connected with the improvement of fresh water mixing process with an oil emulsion. 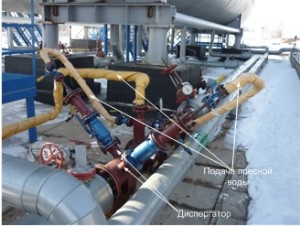 The alignment degree of salt concentration in the droplets of the emulsified water involved in the process is assumed as an indicator of the ideal mixing. Saving a large number of drops of fresh water in the stream of the treated oil emulsion after mixing was explained by the low efficiency of the mixing process. To eliminate this phenomenon, special hydraulic devices were used, which increase the intensity and duration of the fresh water mixing with the feed oil emulsion, as well as the method of the step by step mixing and separation of crude oil with fresh water.

Insufficiently effective devices are used in the desalination plants at the incorrect formulation of the problem such as mixing valves with integrated turbulizers, centrifugal circulating pumps. It results in the fact, that it does not provide a sufficient degree of salty stratum water droplets trapping by the water globules of freshwater, their coordination in size and the ratio of droplets at the beginning of the process. Besides, trapping rate of globules of the stratum water also depends on the state of the armoring shells on their surface is rather high, when a shell is destroyed.

The solution of the problem has been divided by us into two stages. The first — to ensure that the average size of the droplets of fresh water globules correspond to the globules of mineralized stratum water using a dispersant of special design, the second stage — to ensure the most efficient mixing of fresh water droplets with the incoming flow of oil emulsion with mixer of special construction.

For effective sedimentation of water-oil emulsion pre-treated in the above devices we use horizontal pressure oil sumps with the volume up to V = 200 m³, which provide sufficient time for the treated oil flow in devices: not less than 120 minutes at the operating temperature of at least + 70°C.

Suction clarifier tank are fitted with internal shelving units for thin-layer sedimentation of micro globules of stratum water in the treated oil.

Our company carries out the technological processes and productions integrated automation projects, and ensures their emergency protection and fire safety.

Analytical systems are one of the most effective means of operational quality control of technological processes, which allows to analyse gases and liquids multicomponent samples at all raw material processing stages.

«GKS» RPE is a domestic manufacturer of the Control and Process Instrumentation. The instrumentation production line is equipped with unique high-tech equipment that meets modern international standards.